MY NAME IS KHAN is a fascinating love story, has an angle of religion and a world-shaking incident as a backdrop.

MY NAME IS KHAN mirrors the era we live in. Not a day goes by when you haven't heard/read/watched news of terror attacks and innocents ... 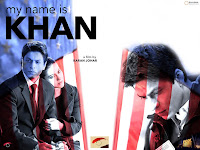 MY NAME IS KHAN mirrors the era we live in. Not a day goes by when you haven't heard/read/watched news of terror attacks and innocents being killed. We live in turbulent times. Also, the movie states - and states very strongly, without mincing words - Not all Muslims are terrorists.

Karan Johar's cinema got more real from KABHI ALVIDA NAA KEHNA onwards. In MY NAME IS KHAN, the storyteller attempts to make a social statement and succeeds completely. At the same time, it takes no sides. If the protagonist says 'My name is Khan and I am not a terrorist', it also exposes those who misadvise the youth with inflammatory and rabble-rousing speeches.

Karan's take on the issue deserves the highest praise, since a subject like this is difficult to attempt. Final word? MY NAME IS KHAN is Karan, SRK and Kajol's best outing to date. Do I need to add anything more?

Rizvan Khan [Shah Rukh Khan moves to San Francisco and lives with his brother [Jimmy Shergill] and sister-in-law [Sonya Jehan]. Rizvan, who has Asperger's syndrome, falls in love with Mandira [Kajol]. Despite protests from his brother, they get married and start a small business together. They are happy until September 11, when attitudes towards Muslims undergo a sea-change.

When tragedy strikes, Mandira is devastated and they split. Rizvan is confused and upset that the love of his life has left him. To win her back, he embarks on a touching and inspiring journey across America.

Let me alert you. The story unfolds feverishly from the very start itself. So if you miss a scene or two, chances are you would've missed some vital links in the story. The fact is, there's too much happening in the first half. Although the narrative tends to get leisurely-paced at times, the wheels continue to move from one episode to another.

A number of sequences are endearing. For instance, the romance between SRK and Kajol is subtle, yet charming. But it's SRK's relationship with Kajol and their kid that's one of the best parts of the movie. Your heart bleeds when an accident occurs and their lives are torn apart. Kajol's outburst - first, when her son meets with a catastrophe and second, when she confronts SRK - are truly shattering.

MY NAME IS KHAN's strength lies in the fact that you root for Khan all through. At the same time, you are weighed down when he's in a vulnerable situation, especially when he's labelled a terrorist and thrown behind bars. You don't realize it, but the fact is that you, as a spectator, have already got entwined in Rizvan and Mandira's lives.

There's a slight hitch in the second hour, when SRK returns to Georgia to save a hurricane-ravaged hamlet. Also, the media exercise tends to add to the length of the film. Nonetheless, it's a minor hiccup that doesn't rob the film of its punch.

There's just one word to illustrate Karan's direction - exemplary. One of the finest storytellers of our generation, he deserves brownie points for deviating from 'Karan Johar brand of cinema' and attempting a film that knocks on your heart and stimulates your mind. With MY NAME IS KHAN, Karan takes rapid strides as a storyteller.

Shibani Bathija's screenplay is truly arresting. Shibani and Niranjan Iyengar's dialogues are noteworthy and many a times, applaud-worthy. Ravi K. Chandran's cinematography is awe-inspiring. Shankar-Ehsaan-Loy's music gels well with the nature of the film.

When a film stars two of the finest talents of the country, you expect nothing but the best. SRK, well, how does one describe his performance? To state that this is his best work so far would be cutting short the praise he truly deserves. In fact, no amount of praise can do sufficient justice to his portrayal of Rizvan Khan, who has Asperger's syndrome. His latest work is several notches above anything he has done before. The only compliment that I can think of is, SRK has a new screen-name now. Raj is passe, Rizvan it is.

Kajol is pure dynamite and casting her for this character was the most appropriate decision. No other actress could've matched SRK in histrionics the way Kajol has. In fact, SRK and Kajol compliment each other wonderfully well and this film only proves it yet again. It's a powerhouse performance from this supremely talented actress.

On the whole, MY NAME IS KHAN is a fascinating love story, has an angle of religion and a world-shaking incident as a backdrop. It not only entertains, but also mesmerises, enthrals and captivates the viewer in those 2.40 hours. At the same time, a film like MY NAME IS KHAN is sure to have a far-reaching influence due to its noble theme. I strongly advocate, don't miss this one!