Paa...A film that should strike a chord with every paa, maa... just about everyone with a hear 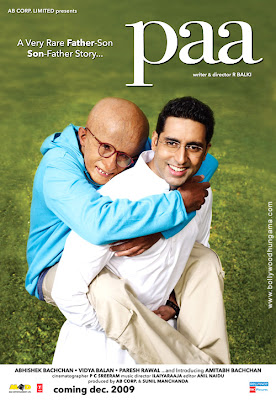 Can you ever imagine watching an Amitabh Bachchan film and not watching Amitabh Bachchan in it? Seems impossible, isn't it? The towering persona and the rich baritone just cannot be overlooked. But R. Balki transforms the legendary actor into Auro, replaces the rich baritone with the voice of an adolescent [who's neither grown up, nor a kid] and taps the hitherto untapped talent of the icon.

Trust me, 10 minutes into the film and you forget you're watching Amitabh Bachchan. For, Auro takes over the moment he is introduced to the viewer.

PAA is a simple film told in the most simplistic manner and that's one of the prime reasons why this film works big time. The emotions would've fallen flat had the writing been sub-standard or the execution of the material been humdrum or the actors been inferior. But, thankfully, PAA scores in all three departments, although it must be said that the entire slum redevelopment episode is a complete put-off.

Yet, all said and done, PAA is an outstanding film. A film for every paa, every maa... for everyone with a heart. Take a bow, Auro!

Auro [Amitabh Bachchan] is an intelligent, witty 13-year-old boy with an extremely rare genetic defect that causes accelerated ageing. He suffers from progeria. Mentally, he is 13, very normal, but physically he looks five times older.

Inspite of his condition, Auro is a happy boy. He lives with his mother Vidya [Vidya Balan], a gynaecologist, but is completely clueless of his father's identity. Till he meets him, Amol [Abhishek Bachchan], who is a full of ideals politician.

Okay, let's not disrespect Balki by calling PAA a rip-off of THE CURIOUS CASE OF BENJAMIN BUTTON or JACK. It's not! PAA looks at the varied relationships so minutely. It may've been publicized as a father-son film, but the women - mother and granny - play equally pivotal parts.

The first hour of PAA grips you in patches. The introduction of Auro is brilliant, but the moment the story focuses on the politician and his arch rival's sub-plot, it goes off-track. Sure, there are some interesting sequences, but the impact isn't mesmeric.

But the post-interval portions take the film to dizzy heights and camouflages the defects. The father-son bonding and the penultimate 25 minutes raise the bar. The emotional quotient is tremendous. Get ready to overhear a lot of sniffs and see a lot of moist eyes once the lights are switched on.

Note the two sequences in the climax, when Auro reveals what his father's first mistake was and the pheras towards the end. Also recall the scene when the girl Auro detests for a certain reason shows up with a sketch of Auro. It moves you completely.

But let's not mistaken PAA to be a rona-dhona movie. It's a positive film with funny/light moments in plenty. The conversation between Auro and his best friend, on various occasions, are superb. Also, not once does PAA show Auro as 'different'. He's one among the kids and there's no discrimination whatsoever, which is remarkable.

Director R. Balki deserves a salute for thinking out of the box and also presenting Amitabh Bachchan like never before. The writing may be erratic, but his handling of the emotional moments is exemplary. Note this, he would be a force to reckon with after PAA. Ilaiyaraaja's music is soothing. P.C. Sreeram's cinematography is incredible.

It would be a blunder if one missed out the contribution of the makeup artists. Transforming the veteran actor into a kid must've been an arduous task and Christien Tinsley and Domini Till deserve to be complimented for making Auro look so real.

Now to the performances! No amount of praise, no amount of adjectives and personifications would do justice to Amitabh Bachchan's performance as Auro. Sure, the icon has enthralled us with superlative performances in his four-decade career, but PAA is something else. The icon keeps surprising you at regular intervals and PAA is one of those beautiful surprises, which will remain etched in your memory forever.

That doesn't mean that the remaining performances get dwarfed by Auro. Sure, PAA belongs to Auro, but not once does Abhishek Bachchan dither from his position or seems inferior. This is the hallmark of a tremendous actor, which Abhishek is. Vidya is another surprise of PAA. She takes giant strides as an actor and proves yet again that given the right roles, she can match up to the best in the business.

Paresh Rawal is effective. Arundhati Naag is amazing. So is the kid, Pratik, enacting the role of Auro's best buddy. His telephonic conversation with Auro is superb. Jaya Bachchan's presence is lovely.

On the whole, PAA is an amazing experience. It makes you realize two things. One, the Hindi film industry is also capable of narrating fresh stories. Two, Amitabh Bachchan is truly the most accomplished actor this side of the Atlantic.

Talking from the business point of view, PAA has been made in a sensible and reasonable budget [approx. Rs. 17 crores, including P & A expenses], which should easily be recovered from multiplexes alone.

In the final tally, here's a film that should win awards [for Auro] and also box-office rewards, given its low costs. A film that should strike a chord with every paa, maa... just about everyone with a heart!