Basically 3 Idiots main theme essence is that Life is all about listening to your heart and chasing your dreams. Two friends [R. Madhavan ... 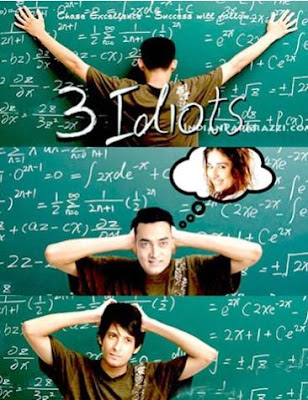 Basically 3 Idiots main theme essence is that Life is all about listening to your heart and chasing your dreams.

Two friends [R. Madhavan and Sharman Joshi] embark on a quest for a lost buddy. As they make their way through the perilous landscape [Shimla, Manali, Ladakh], another journey begins: their inner journey through memory lane and the story of their friend - the irrepressible free-thinker Rancho [Aamir Khan], who, in his unique way, touched and changed their lives.

It's a story of their hostel days that swings between Rancho's romance with the spirited Pia [Kareena Kapoor] and his clash with and oppressive mentor, Viru Sahastrabudhhe [Boman Irani]. And then one day, suddenly, Rancho vanishes...

Who was he? Where did he come from? Why did he leave? The friend who influenced and inspired them to think creatively and independently, even as the conformist world called them three idiots. Where is the original idiot now?

Hirani is a genius and that has been proved twice in the past. He proves it for the third time with 3 IDIOTS. Screenplay writers Hirani and Abhijat Joshi and screenplay associate Vidhu Vinod Chopra narrate a story that's straight out of life. A story that each one of us can relate to or identify with.

Very often, we've read news-reports of students committing suicides because they've to live up to the family's pressure/expectations. This film depicts it at the very start, when a student commits suicide. But the issue doesn't end there, for 3 IDIOTS raises a pertinent question: Was it suicide or murder?

Hirani balances the rough and smooth incidents in their lives beautifully. The sequences in the campus, right from the ragging sequence at the start, to Omi's speech when the word 'chamatkaar' is changed to 'balatkaar' [superb; will bring the house down], to the trio getting caught in an embarrassing situation at the reception of Kareena's sister [Mona Singh], to the dinner sequence at Sharman's house, to Kareena and Aamir driving Sharman's seriously ill father on their bike to the hospital... the funny moments would make your jaws ache.

The interval point is a shocker. The point at which the first half ends will leave you stunned. Now what was that? Kahani mein twist!

The mystery is solved soon after the intermission ends and a new journey begins. That's one of the USPs of the film. Just when you think that the story would be solved, a new story begins. Of course, the pace dips slightly in its second hour, especially during the delivery sequence of Mona [which may appear filmy to a few], but the immediate sequence, when the baby boy is born and also the subsequent sequence between Boman and Aamir bring the film back on track. The culmination to the film is novel and yes, it's a master stroke from the writing point of view!

Every person behind the camera gives his/her best to the film. Hirani and Joshi's screenplay is the mainstay of the film. If you fondly recall 'Gandhigiri' from their previous film LAGE RAHO MUNNABHAI, you'd have a new phrase to chew on this time: 'All Izz Well'. Muraleedharan C.K.'s cinematography is awesome. Note the aerial view at the very start, when Madhavan and Sharman begin the journey to Shimla or the picture perfect look of Ladakh... the DoP does a magnificent job.

Shantanu Moitra's music may sound plain ordinary to ears, but when viewed on screen, the score is just perfect. 'Give Me Some Sunshine', 'All Is Well', 'Zoobie Doobie' are three tracks that would grow on you after you've watched the film. The choreography of 'All Izz Well' [Avit Dias] and 'Zoobie Doobie' [Bosco-Caesar] are eye-catching. The background score [Sanjay Wandrekar, Atul Raninga, Shantanu Moitra] is right.

3 IDIOTS belongs to everyone. But, yes, there's no denying that Aamir makes you forget all his past achievements as you watch the amazing actor play Rancho. To state that this ranks amongst his finest works would be an understatement. Madhavan is incredible, especially in the sequence when he explains his point of view to his father [Pareekshit Sahani]. Sharman is outstanding from start to end. This was a difficult role to portray and only an actor of calibre could've pulled it off. Boman is superb as the vicious head of the institute. The scenes between Aamir and Boman are extra-ordinary and it's a treat to watch these two powerful actors clash on the big screen, without getting overdramatic. Boman's appearance, mannerisms and dialogue delivery are exemplary.

The length of Kareena's role may not be as much as Aamir, Madhavan and Sharman, but she registers a strong impact nonetheless. Omi is excellent and the viewers are sure to love his acidic tongue and gestures in the movie. Mona Singh doesn't get much scope. Jaaved Jaffery is competent. Pareekshit Sahani is decent.

On the whole, 3 IDIOTS easily ranks amongst Aamir, Rajkumar Hirani and Vidhu Vinod Chopra's finest films. Do yourself and your family a favour: Watch 3 IDIOTS. It's emotional, it's entertaining, it's enlightening. The film has tremendous youth appeal and feel-good factor to work in a big way.