Beijing Olympics HERO..The GREAT Micheal Phelps Created a History Today the 17th of august 2008..Ya he just won the all 8 GOLD Medals in a ... 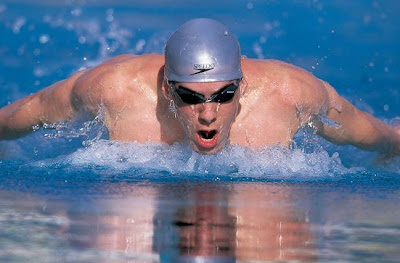 Beijing Olympics HERO..The GREAT Micheal Phelps Created a History Today the 17th of august 2008..Ya he just won the all 8 GOLD Medals in a single olympic BROKE Splitz's individual record of 7 Golds at Athence Olympic 35 years before.

When he was 15 years old, Michael Phelps competed at the 2000 Sydney Olympics, placing fifth in the 200m butterfly. The following year he broke the world record for the event, becoming, at age 15 years 9 months, the youngest male ever to set a swimming world record.

Four months later, he won his first world championship, setting another world record in the 200 butterfly. Phelps caused a sensation at the 2003 World Championships. Not only did he earn four gold medals and two silver medals, but he set four world records. In 2004, he became the first swimmer to qualify for the Olympics in six individual events. (He decided not to compete in the 200m backstroke).

At the 2004 Athens Olympics, Phelps began his assault on the record books on the first day of competition, winning the 400m individual medley by 3 ½ seconds and setting a world record. The next day he added a bronze medal in the 4x100m freestyle relay, and the day after that he picked up another bronze by setting a personal record in the 200m freestyle.

On 17 August Phelps beat out Takashi Yamamoto of Japan to win the 200m butterfly and, an hour later, he swam the leadoff leg for the U.S. 4x200m freestyle relay team that held off the Australians and gained the victory. Phelps' next gold-medal victory came in the 200m individual medley, which he won by 1.64 seconds.

In the 100m butterfly, he barely out touched teammate Ian Crocker for his seventh medal. Finally, Phelps gained a gold medal in the 4x100m medley relay by swimming the preliminary heats. By so doing, he joined gymnast Aleksandr Dityatin as the only athletes to earn eight medals at a single Olympics.

Speedo promise to give 1 million doller while he clinch 8 gold medals in an olympic. WELDONE! Micheal...Micheal is synonims of GOLD MEDALS AND THE WORLD RECORD HOLDER..Keep It of You are truely a legendary and greatest Olympin..Keep it up.
Wanna See His Gallery? Click Here>>